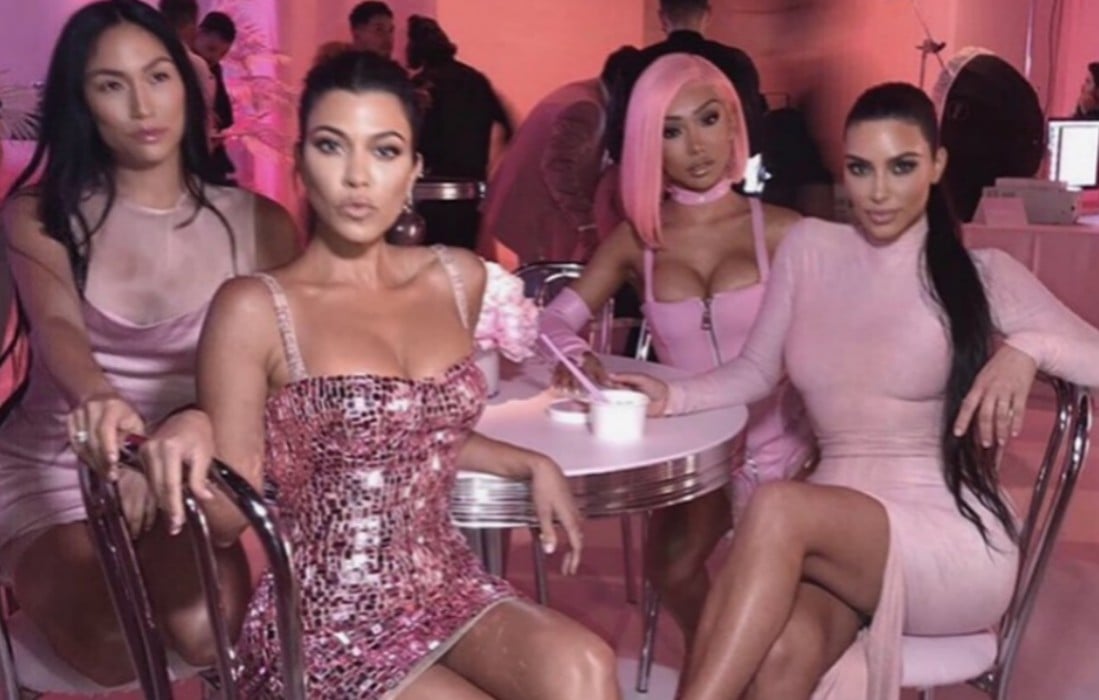 Pink was the color of the day when Kylie Jenner held her launch party for KylieSkin, her new beauty line. Sisters Kim Kardashian and Kourtney were in attendance and Kim shared several photos on her Instagram page. In one picture, Kim Kardashian was seen eating Ramen noodles. Why this in itself isn"t out of the ordinary, the picture went viral as people noticed the noodles were pink. In fact, it wasn"t just the noodles but all of the food that was provided.

The walls were a pretty blush hue that blended seamlessly with the tables and table linens. The men wore black and that was just about the only contrasting color in the room. The tables were adorned with blush colored roses and the women wore pink.

There is no question that Kim Kardashian-West looked flawless in her skin-tight pink dress and with her hair slicked back into a ponytail. Equally a beauty mogul as her sister whose party she was celebrating, Kim Kardashian flashed plenty of leg in her photo. Fans were surprised to see her indulging in the carbohydrate-laden meal as Kim is known for often using low carb diets to keep her weight in check.

Kim Kardashian captured the photos with the following.
"pink ladies 🎀🎀🎀🎀🤟🏼"

You may see the photos as Kim Kardashian shared them below.

At this time, no one in the Kardashian family is believed to be selling pink chopsticks or other eating utensils.

In the second photo, you will see that Kim Kardashian is joined at a table by her sister Kourtney Kardashian, Nikita Dragun (the YouTube influencer) and Stephanie Shepherd (Kim"s friend and former assistant). Each of the women is wearing pink while Nikita opted to accessorize her outfit with pink hair.

Many fans praised Kourtney"s choice of dress and said that though Kim was a stunning figure and her legs looked marvelous, it was Kourtney and her sparkles that really lit up the picture and stood out.

What do you think of Kylie Jenner"s party for KylieSkin? Do you think it was pretty in pink?