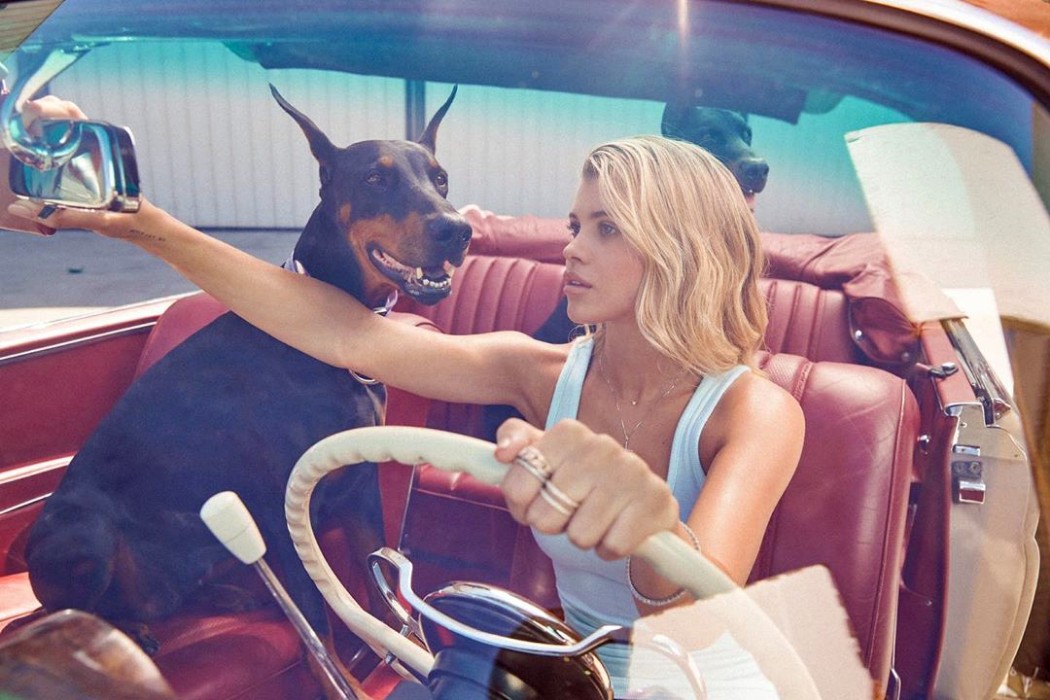 Sofia Richie is going viral after sharing photos of herself in a baby-blue mini dress standing in front of a classic convertible guarded by two Doberman Pinschers. Sofia featured two photos in the post and used the caption, "Summer mood @talentless" with the photo. While Sofia had recently shared photos featuring herself in a bikini the pictures that are more modest are getting an equally huge response from her 4.4 million followers.

In Sofia"s new photos, it is the blue mini dress that is most striking. The tag refers to boyfriend Scott Disick"s clothing line Talentless and Sofia proves to be the perfect model as her long, sleek legs take center stage and the picture exudes the warmth and happiness of a perfect summer day.

Sofia paired the baby blue dress with matching socks and sneakers. Her blonde hair was styled in loose, beachy waves and she wore a pair of sunglasses. The second photo features Sophia in the front seat of the car with one of the Doberman"s in the passenger seat. Sophia looks at herself while she adjusts the rearview mirror and you"re able to get a better view of her face.

Sophia opted for minimal makeup and her features were accentuated with natural tones.

You may see the photos Sofia Richie shared below.

The daughter of Lionel Richie and sister to Nicole and Miles, Sofia Richie came into the limelight for her relationship with Kourtney Kardashian"s baby daddy who is sixteen years her senior.

Now the latest rumors and gossip say that Sofia is pushing Scott to marry her and that she is growing increasingly concerned about his relationship with Kourtney. There have been new reports saying that Kourtney and Scott still have an undeniable bond that extends further than the three children they have together.

At this point, there is nothing to indicate that Scott Disick is preparing to put a ring on Sofia"s finger and at only 20-years-old, Sofia has her whole life ahead of her.

What do you think of Sofia"s photos modeling Scott Disick"s clothing line? Do you think Sofia should get married to Scott Disick? Should Sofia focus on her life instead?