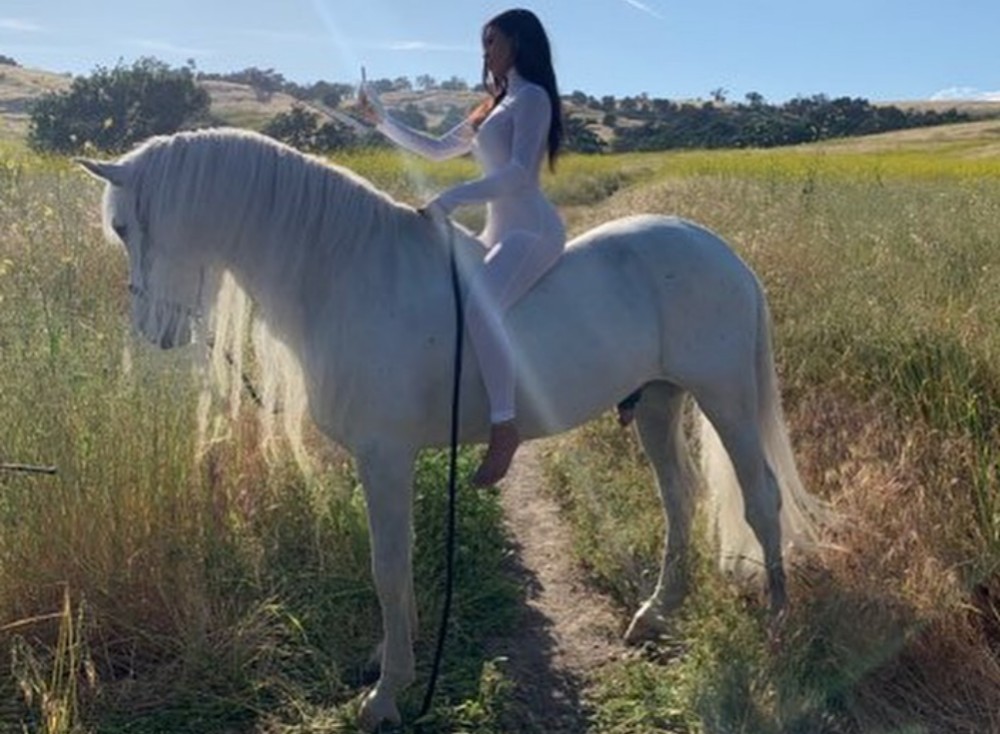 Kim Kardashian-West shared behind-the-scenes photos from her Mrs. West KKW Beauty collection today. The series of photos included Kim dressed head-to-toe in white and riding on a white horse, as well as wearing a tight-fitting white dress and holding an accompanying white rose. The photos were seen by millions who responded that the reality star looked beautiful and glamorous.

In another photo, Kim was wearing a feather-trimmed, white robe while reclining on a lounge. The accessories Kim Kardashian-West featured throughout her photoshoot and on the official website, most were white roses.

Kim Kardashian-West shared the following caption with her series of photos.

"Shooting @kkwbeauty Mrs. West Collection was so much fun. Everything is almost sold out. Just a few more highlighters and lip stick & gloss left.Kkwbeauty.com."

The Mrs. West beauty palette and the full collection sold out quickly.

You may see Kim Kardashian"s behind-the-scenes photos from the shoot in the slideshow below.

Kim Kardashian-West clarified that the Mrs. West collection is limited in scope and after it sells out, it will be over.

"I’m so happy you all are loving the Mrs. West Collection!!!! It’s limited edition so we won’t be relaunching it. We have some lipstick and lipgloss left kkwbeauty.com."

Response to Kim Kardashian-West"s photo shoot was a huge success and the pictures have gone viral.

More than 1.2 million liked the photos and there are more than 5,000 comments from fans who expressed their excitement over the new makeup line.

Many people complimented Kim for wearing white and said that it was the best color for her. Some fans asked what Kim was doing on her mobile phone. She could be seen looking at her phone in many of her pictures.

Kim Kardashian-West"s fans loved the photo shoot. Some said that it had a true 90"s vibe and others responded that it was inspirational.

What do you think of Kim Kardashian-West"s new makeup line Mrs. West for KKW Beauty? Did you order any of the products? What are your thoughts on Kim"s behind-the-scenes photos from the shoot?
Posted by Alex Greg at 7:38 AM